I love eagles. I don’t know why, but as long as I remember, the eagle has always been my favorite bird.

Maybe it is because of their vision. If a human had the vision of an eagle they would be able to see an ant crawling from the top of a 10-story building. From 1,000 feet up in the air, an eagle can see a rabbit running in the prairie up to two miles away.

I’m not talking about eyesight this week, though. I’m talking about the vision great leaders have. One of those leaders is Mary Ellen Sheets. The other visionary is her daughter, Melanie Bergeron.

I became, to my surprise, a single mother, all of the sudden divorced, with two sons and a daughter. The boys wanted to earn their own spending money, and I tried to help them. When their father left, he left an old green pickup truck that we bought from Michigan State University. The school used it on the campus ground. The boys wanted to use it to move people, so I put a little ad in our local shopping guide, and that’s how it all started.

The first line of the ad was Two Men and A Truck. Though they weren’t men, Brig, the older, was just 16, and John was 13. I also made a form for the boys so they could track of things—addresses; what they wanted moved. I sat down at the kitchen table and drew a logo on top of the moving sheet. It’s still our logo, a stick figure, black-and-white drawing of the front of a truck with two people sitting in front.

Perhaps you’ve seen their logo. I remember Mary Ellen telling the story about someone telling her it was so nice she allowed a little kid to draw their logo. (She didn’t reveal the person who really drew it). 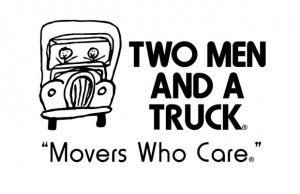 In 1989, Mary Ellen awarded her first franchise. I’m sorry to say it wasn’t a visionary move for this leader. It was to her daughter, Melanie Bergeron, who lived in Atlanta. Five years later Mary Ellen convinced Melanie to move back to the Detroit area and become company president.

There was only one issue—they weren’t making enough money to pay Melanie. Yet Melanie had the vision of what the future could be. A few years later Melanie attended her first International Franchise Association (IFA) Convention.

I invite you to read the press release IFA sent out two weeks ago:

A long-standing IFA member, Bergeron has held many leadership positions in the association throughout her career. She has been a member of the IFA Board of Directors since 2008 and a member of the IFA Executive Committee since 2011. She has moved through the IFA leadership chairs before assuming the chairmanship, including serving as vice chair, treasurer and secretary.

Bergeron has chaired the IFA Convention Committee, served on the Franchisor Forum, the FranPAC Advisory Committee, the International Committee, the International Interest Group, as well as a mentor for IFA’s mentoring program FranShip. In addition, she has held leadership roles in the IFA Educational Foundation, including its Board of Trustees and the Executive Committee. Bergeron is active on the Board of Governors for the Institute of Certified Franchise Executives (ICFE) and she was the recipient of the IFA Bonny LeVine Award in 2001 for her role in mentoring women.

TWO MEN AND A TRUCK INTERNATIONAL Inc. is the largest moving franchise company in North America. Bergeron began as the company’s first franchisee. The founder of the company is her mother, Mary Ellen Sheets. Bergeron became president in 1994 and, together with her team, grew the company from $6 million to $198 million. The company has been featured on the Today Show and CNBC’s How I Made My Millions. Bergeron has spoken at several universities and for many business groups to share best practices she has learned along the way.

Bergeron is a member of the Young Presidents Association and a member of the Central Michigan University Dean’s Business Advisory Council. In addition, she is on the board of directors of the Lansing Regional Chamber of Commerce and is president of a non-profit thrift store called Hidden Treasures.

She is a graduate of Central Michigan University in Mount Pleasant, Mich., with a bachelor’s degree in marketing and business administration.

Melanie is a good friend of ours. She is an amazing woman who, when you first meet her, seems more like the “lady next door” instead of a corporate leader. Her two brothers are still involved with the company. As you read above, the company continues to grow. When we moved to Waco, Texas, we made sure that Two Men and a Truck moved us.

When she made her speech at the convention she thanked two other women franchisors who “took her under their wing” as a young member of the IFA. One was Dwyer Group’s co-chair, Dina Dwyer-Owens, who also led the IFA as chairman of the more than 1,400 franchise companies who are a part of the organization.

Vision. All three women have it. I’m hoping it rubs off on me. I’ve already got the collection of eagles at the house.