Leaders Find Ways to Give 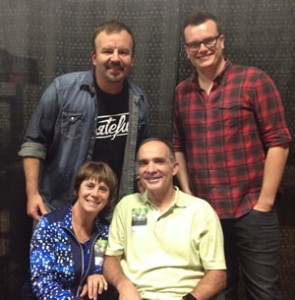 I hate to admit this but I haven’t gone to many Christian music concerts. Okay, okay. I went to one, once, when I was going to high school. That was 40 some years ago.

I love Christian music. I love to sing and in my car I have a couple of stations pre-programmed, along with classic rock, sports radio and NPR. Talk about someone who is either mixed up or just has several personalities. Neither sounds good.

When Doug Rogers, my fellow Dwyer Group president who leads Mr. Appliance, was recuperating from his tragic bicycle accident (that I wrote about several months ago) his wife read the book “Thrive” to him. It was written by Mark Hall, leader of the Christian rock group “Casting Crowns,” whose song “Thrive” is a big hit. “Thrive,” both the song and book, continue to inspire Doug and Liz through their journey.

Doug returned to work just more than 11 weeks after his injury and made the trip to Dwyer Group’s annual convention in Orlando. This is a guy who was supposed to be incapacitated for six months to a year! He spoke at the convention prayer breakfast and Dwyer Group distributed more than 400 copies of the book “Thrive.”

Last Thursday, we read a feature in the local paper about a Casting Crowns concert taking place the next day very close to where we live in central Texas. When we learned that Doug and his wife, Liz, were attending, Mary Kay and I decided we would love to join them.

I found the Casting Crowns’ website and started learning more about this amazing band.

I’d heard a couple of their songs but knew nothing else about them. I found that Casting Crowns was the fastest-selling debut artist ever in Christian music with sales of their self-titled release surpassing 800,000 copies in less than a year. They also made history when their song “Who Am I?” became the first song to simultaneously hold the No. 1 position on Christian Radio and Retail Weekly’s Adult Contemporary, Inspirational and Christian Hit Radio charts. More importantly for me, I like the rock music they write and perform!

On their site they had a quick bio about each of the seven band members. Remember, until this time I couldn’t pick any one of these performers out of a lineup of two people – the other being an NFL lineman. I tell you, I had no idea who they were.

I sent an email to the entire band, their manager and anyone else I thought might be able to get Doug a chance to meet them. This e-mail was sent at 6:41 p.m. At 6:49, 8 minutes later, I received the following email from Megan Garrett, again, someone I never heard of until that evening. It read, “Thank you for emailing us! We’d love to meet all four of you tomorrow night if possible.”

I went back to their site and found that Megan was actually a band member! In fact, she is the lead female singer of Casting Crowns! grabbed Mary Kay and told her I’d already gotten a response and it was from a band member … and they wanted to meet us!

After another email exchange Megan said she would leave four backstage passes for us at the will-call window and we needed to be at the concert an hour before the show. Frankly, I couldn’t believe it. I hoped to receive a response from someone – but never from someone who was undoubtedly rehearsing the day before the event.

As we met Megan and the other band members Friday night it struck me that leaders, regardless of how successful or popular they are, take time for others. Megan said, “How could we not have wanted to meet Doug?”

Now we have memories, pictures, a signed copy of “Thrive” and pictures with the other two groups that performed Friday night, the singer Mandisa and Dave, lead singer of “Sidewalk Prophets.”

Megan’s husband(like many of the group’s members) is a youth pastor in the Atlanta area and Casting Crowns only performs Thursday through Saturday so they can be back in Atlanta Sunday morning with their youth groups. Amazing.

Leaders do things others don’t do. They lead in so many ways, just as Megan did with her kindness to us. Speaking of leaders, I continue to be amazed by Doug. You can watch his story chronicled and the award he received from Dwyer Group in September by watching the 20- minute video, “The Doug Rogers Award,” on YouTube.

This week I ask you to think about someone you can help, someone who needs your time, someone you can reach out to just like Megan reached out to us. Don’t think I’ll wait 40 more years for my next Christian rock concert. Doubt that I’ll ever meet anyone, though, like Megan. She gave four people from Waco, Texas, a memory for life. And Doug continues to inspire others; yesterday he was a featured speaker at a Wounded Warriors event, sharing his message to THRIVE!

Have a good week.

2 comments on “Leaders Find Ways to Give”